Participation is strictly requested! Through this Citizen Science Project of the Seal Centre Friedrichskoog, everybody who is interested in grey seals in the German North Sea can contribute to the research on these animals! 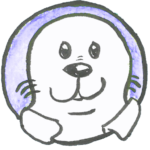 Help us with our research, become a grey seal detective!

The fur pattern of grey seals is as unique as the human fingerprint. That makes it possible to use photographic identification to study grey seals. Through the comparison of photos, researchers can find out if an individual is already known. This way, former abandoned pups can also be clearly identified years later in the wild!

On 18.12.2011, Sternchen came to us as an abandoned pup from Amrum. She was estimated to be about five days old and weighed 13.5 kg. She developed really well during her rehabilitation so that we could release her with a proud weight of 44.6 kg on 11.3.2012. Since then, she has already been spotted on Heligoland twice. She seems to have liked it well there and so chose the Heligoland Dune as the place to birth and raise her offspring. Her young was born on 1.12.2017.

Sternchen was reported to the staff of the Jordsand society through our project SEAL BINGO! and then identified by us.